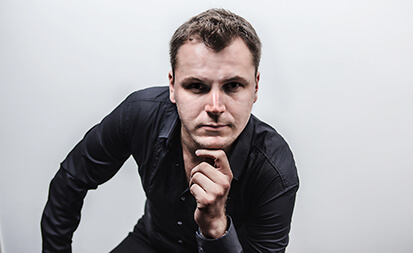 “INUCE. Dirk U. Moench”, headquartered in the heart of Europe, is an international design office that specializes in architectural and urban design. Led by an experienced and diversified team of designers and marketers, it is their mission to exceed customer expectations through state-of-the-art service. Dirk U. Moench is the creative director of INUCE. Dirk U. Moench work is characterized by the concern about the effects the current urbanization speed has on urban residents, especially in fast-growing developing countries. In it he expresses the hope that architecture can induce a localized healing process to traumatized urban environments, by reinforcing human contact, developing local heritage, and facilitating spiritual experience – thus fulfilling the most essential human needs.

When Fuzhou’s Huaxiang Church was built in 1938, its steeple was the only vertical structure emerging from an ocean of traditional Ming-style residences. Since then its congregation became a witness of the radical transformations in city and society. Today the little building finds itself at the bottom of a veritable maze of shopping malls and office blocks. In dire need for additional space, the congregation decided to build a supportive community center on a plot of land adjacent to the historical building. 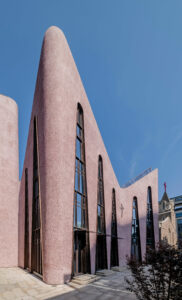 The challenges imposed on the project were indeed extraordinary. Firstly, the client’s functional and spatial requirements were conflicting with the height and area restrictions imposed by the heritage authority on this small plot of land. Secondly, the isolated character of the site – surrounded by obstacles on all sides – determined that only upper levels would be visible from the public street nearby. Thirdly, the immediate adjacency of the new building to its historic counterpart, in the midst of an uncommunicative set of buildings high and low, modern and traditional, Eastern and Western, demanded a clear attitude regarding the relationship of the old and new architecture.

The design harmonizes such imbalances by adopting the role of an urban mediator, subtly folding its contours and modulating its vertical development in a continuous up-and-down movement. The community center’s façade makes a visual counter-statement to the gloss and shine of the curtain walls encircling it. It is finished in red granite similar to the old church’s – tumbled down to smooth pebbles and applied to the walls using a pebble dash technique once typical for the local architecture and now almost entirely forgotten. In a religious sense, this infinitude of pebbles translates into matter the dual nature of the word “Church”, which refers not only to the single building itself but also to the sum of all individual Christians who compose it.

Functionally, the organization of the building corresponds to the client’s needs by providing a range of multi-functional spaces. As a central piece of this strategy, the rooftop areas are conceived as publicly accessible open-air amphitheaters allowing the community to hold outdoor assemblies or enjoy being elevated from the worries of the world below. Only a few months after completing the community center has already become a popular hang-out place for the youth and serves as a viewing platform from which locals and tourists enjoy an unobstructed view onto the city’s historic district.

(The article was originally produced in The Tiles of India magazine, March- April 2019 issue) 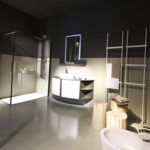 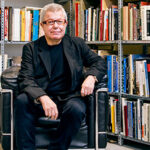