Architect Surbhi Singhal and Deepanshu Arneja of SIAN Architects have transformed the façade of a residence into a piece of art.

SIAN Architects is a practice based in New Delhi and Meerut, India. Established in the year 2017, SIAN is a collaboration between Surbhi Singhal and Deepanshu Arneja, working in the fields of architecture, interior design, and material innovation.

SIAN Architects turned to stone (resin) to create an unconventional ‘artefact’ with their latest project Stone- Print Villa in Meerut, India, which collectively strikes a fine balance between smooth and rough, seamless and patterned, restraint and flamboyance, contemporary and traditional, art and architecture and most importantly ‘nostalgia’ and ‘aspiration’.

Flanked by the archaeological ruins of Vidura and Hastinapur and the idealistic ‘shiny’ urbanity of New Delhi, Meerut often finds itself in a ‘dilemma of identity. Over time, the culture of the city, the notion of its inhabitants, and the built environment have persistently deconstructed so much so that it has lost much of its contextual ‘evenness’. This traction between ‘nostalgia’ and ‘aspiration’ is especially visible in the old neighborhoods or ‘mohallas’ of the city, which incidentally also becomes an active background for the vision behind Stone-Print Villa.

Situated on a narrow cul-de-sac in an old neighborhood of the city, Stone-Print is a part of what was once a large living quarter occupied by related members of a mercantile community. Over time, various members have moved out and the living quarters have broken down into smaller residences. However, the occupants of Stone-Print villa have vehemently held onto their ancestral land.

This perpetual association with the land is almost ‘reverential’ and the brief simply asked to portray this relationship in an extremely bold and visible manner through the façade. It asked for an aesthetic that doesn’t shy away, has a powerful presence, and unfolds as an ‘artefact’ representing the occupant’s unyielding connection with their ‘home’.

While curating the façade, the studio chose to retain the existing structure and decided to approach it as a canvas that could be ‘cladded’. Two Indian natural stones were chosen for their similar yellow color tones and durable structural profiles. Inherently smooth, the stones were processed with varying degrees of sand-blasting techniques to achieve textural-rough surfaces.

Additionally, it was realized that the chips from the base stone when mixed with resin led to a flexible stone-resin prototype, ideal for micro-detailing and ornamentations. Polished, rough, mango, and pale yellow samples were eventually curated out of the same base materials, subsequently opening up various cladding possibilities.

This allowed for a heavily ornate plinth composed of stone-resin panels cut in stepped patterns, wrapping endlessly around the masonry. In complete contrast, the upper storeys were seamlessly ‘cladded’ with a relatively pale sand-blasted version, leaving an over-arching and dominant presence on the street.

Terrace projections were also accentuated with layered stone cladding to overstate the scale of the house and exaggerate it to an almost unacceptable boundary. The elevation is warm-toned and strictly traditional with layers of patterns rendered as a unique expression of architecture.

Apart from the bold material choice, the façade is designed as an ‘art piece’ to achieve the envisioned image and presence. Hence, it was deliberately made ornate with numerous hand-crafted and 3D-printed motifs inspired by the heritage of the residence, such as floral plates on the parapet and the boundary wall, peacock motifs, terrace corbels, and columns.

Ornamentation has been very carefully integrated such that it only appears from certain vantage points on the street and within the building, surprising the viewers without overwhelming them. A similar flamboyance is also adopted for the interiors where ornate walls, ceilings, and patterned floorings reinforce the sensory experience created by the elevation.

At Stone-Print villa, a residential façade is unexpectedly pushed to a monumental status, more so with a material that has been pushed to an ornamentation eminence. Collectively, it becomes an exercise in fine-balance between varied concepts, smooth and rough, seamless and patterned, restraint and flamboyance, art and architecture, and most importantly ‘nostalgia’ and ‘aspiration’. 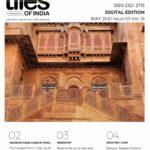