The Radha Rani Temple of Barsana, made with red and white stones in 1675 AD comes alive during the festival of Holi, we explore…

Of all India’s religious celebrations, Holi is the one that tends to attract the most attention both outside and inside the country. Although the entire country takes part in celebrating the festival with great enthusiasm, the best places to celebrate Holi in India are Mathura, Vrindavan, and Barsana, where this festival is celebrated in temples with a unique fervor and devotion. One of the biggest and most popular is the Lathmar Holi festival.

The Lathmar Holi festivities take place at the Radha Rani temple in Barsana, the hometown of Goddess Radha. Lathmar Holi is celebrated days before the actual Holi in the neighboring towns of Barsana (Goddess Radha’s hometown) and Nandgaon (Lord Krishna’s hometown) near Mathura in the state of Uttar Pradesh.

This temple is about 400 years old. This temple was built by Raja Veer Singh in 1675 AD. Red and white stones have been used for the construction of the temple, which is considered to symbolize the love of Radha and Shri Krishna.

The temple is reached by steps, which number about 225. Radha Rani’s father’s name is Vrshabhanu and his mother’s name is Kirti. Radha Rani was born 15 days after Janmashtami on Ashtami of ShuklaPaksha in the month of Bhadrapada. So for the people of Barsana, this place and day are very important. On this day the temple of Radha Rani is decorated with flowers. Radha Rani is offered 56 different kinds of dishes. The offerings of laddus in the temple are offered to Radha Rani. The Prasad is first fed to a peacock because the peacock is considered to be the form of Radha-Shri Krishna. The prasad is later offered to the devotees.

In the Radha Rani temple, Shri Krishna Janmashtami and Radha Rani Janmashtami are especially celebrated with great pomp. Holi festival is special in Barsana because Barsana Holi is famous all over the world. Lattmar Holi is played in Barsana, which started in the 16th century. During the festival days, the Barsana environment is very happy.

The temple’s arches, pillars, and red sandstone resemble the architectural style prevailing during that time. This temple is also the most visited temple in the Braj Bhoomi region (of which Barsana is a part).

The ancient look of the temple along with its brilliant design and architecture attracts tourists and devotees in large numbers. The paintings adorning the walls and ceilings of the temple which depict Radha and Krishna’s pastimes are also a major attraction.

An enchanting vibe, the devotion of thousands of devotees, the colors and the vibrant energy truly makes it an architectural gem of India. 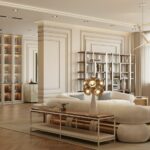 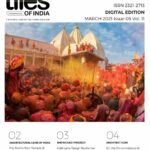