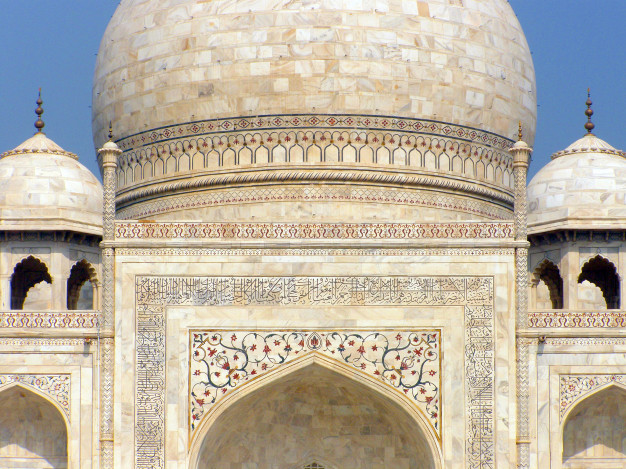 The Taj Mahal, though oft written about, quoted and shot by photographers from all over the world, still remains one of the most beautiful and intriguing examples of the evolution of human architecture and design.

The Taj Mahal is an ivory-white marble mausoleum on the southern bank of the river Yamuna in the Indian city of Agra. It was commissioned in 1632 by the Mughal emperor Shah Jahan to house the tomb of his favourite wife, MumtazMahal. The tomb is the centrepiece of a 17-hectare (42-acre) complex, which includes a mosque and a guest house, and is set in formal gardens bounded on three sides by a crenellated wall.

It is said that the construction of the mausoleum was essentially completed in 1643, but work continued on other phases of the project for another 10 years. The TajMahal complex is believed to have been completed in its entirety in 1653 at a cost estimated at the time to be around 32 million rupees, which in 2020 would be approximately 70 billion rupees (about the U.S. $916 million). The construction project employed some 20,000 artisans under the guidance of a board of architects led by the court architect to the emperor, Ustad Ahmad Lahauri.

The TajMahal incorporates and expands on the design traditions of Persian and earlier Mughal architecture. While earlier Mughal buildings were primarily constructed of red sandstone, Shah Jahan promoted the use of white marble (Makrana Marble) inlaid with semi-precious stones. Buildings under his patronage reached new levels of refinement.

The tomb is the central focus of the entire complex of the TajMahal. It is a large, white marble structure standing on a square plinth and consists of a symmetrical building with an iwan (an arch-shaped doorway) topped by a large dome and finial. Like most Mughal tombs, the basic elements are Persian in origin.

Four minarets frame the tomb, one at each corner of the plinth facing the chamfered corners. The main chamber houses the false sarcophagi of MumtazMahal and Shah Jahan; the actual graves are at a lower level.

The most spectacular feature is the marble dome that surmounts the tomb. The top is decorated with a lotus design which also serves to accentuate its height. The shape of the dome is emphasised by four smaller domed chattris (kiosks) placed at its corners, which replicate the onion shape of the main dome. The dome is slightly asymmetrical. Their columned bases open through the roof of the tomb and provide light to the interior. Tall decorative spires (guldastas) extend from edges of base walls and provide visual emphasis to the height of the dome. The lotus motif is repeated on both the chattris and guldastas.

The interior chamber of the TajMahal reaches far beyond traditional decorative elements. The inlay work is not Pietra dura, but a lapidary of precious and semiprecious gemstones. The inner chamber is an octagon with the design allowing for entry from each face, although only the door facing the garden to the south is used.

The interior walls are about 25 metres (82 ft) high and are topped by a “false” interior dome decorated with a sun motif. The remaining surfaces are inlaid in delicate detail with semi-precious stones forming twining vines, fruits and flowers. Each chamber wall is highly decorated with dado bas-relief, intricate lapidary inlay and refined calligraphy panels which reflect, in little detail, the design elements seen throughout the exterior of the complex. 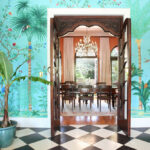