Es Devlin, an artist and designer, creates sculptures and environments that are eclectic scenes stunning you with scale, music, language and light.

Es Devlin is an artist and designer known for creating large-scale performative sculptures and environments that fuse music, language and light. She was born in Kingston upon Thames, London, on 24 September 1971. She studied English literature at Bristol University, followed by a Foundation Course in Fine Art at Central St. Martin’s eventually specialising in theatre design. While undertaking her studies, she prepared the props for Le Cirque Invisible, the circus company founded by Victoria Chaplin and Chaplin’s husband, Jean-Baptiste Thierree.

Her practice began in narrative theatre and experimental opera. After a period working for London’s Bush Theatre, she first worked for the National Theatre in 1998 when Trevor Nunn asked her to design the set for a revival of Harold Pinter’s Betrayal. She has since worked on sculptural designs for the theatre.

Devlin is the first woman to be commissioned by the UK since world expositions began in 1851. Her luminous fluorescent red Fifth Lion sculpture roared A.I. generated collective poetry to crowds in Trafalgar Square during London Design Festival September 2018. The Singing Tree, her collective choral carol installation at the Victoria and Albert Museum, fused machine-learning with sound and light and was viewed by over ten thousand visitors during Christmas 2017; her Mirrormaze generated queues around the block in Peckham in 2016. Further explorations of labyrinthine and map based geometries led to the 7000 square foot hotel room odyssey Room2022 at Art Basel Miami 2017 and the projection-mapped ovoid model city MASK at Somerset House 2018. The designer collaborated with the theoretical physicist Carlo Rovelli on an interpretation of The Order of Time read by Benedict Cumberbatch at the rooftop art space, BOLD Tendencies in Peckham in September 2018. Devlin has made large scale touring stage sculptures in collaboration with Beyonce, Kanye West, Adele, U2, The Weeknd, Lorde, Pet Shop Boys, and the Royal Opera House in London.

Devlin also designed the London Olympics closing ceremony in 2012 and the opening ceremony of the 2016 Rio Olympics. Her work has received three Olivier Awards. She is a fellow of University of the Arts London, and was appointed Officer of the Order of the British Empire (OBE) in the 2015 New Year Honours and Commander of the Order of the British Empire (CBE) in the 2022 New Year Honours for services to design. In 2018 she was elected a Royal Designer for Industry for Theatre Design. Devlin is the subject of episode three of a Netflix documentary series: Abstract: The Art of Design.

In 2019, Devlin delivered a talk at the TED conference in Vancouver entitled ‘Mind-blowing sculptures that fuse art & technology’. It was later selected by TED curator Chris Anderson as one of the best talks of 2019. In 2020, Cirque Du Soleil collaborated with Devlin to create a touring production ″Under the Same Sky″. Executives of the company and Devlin reportedly had creative differences and along with the COVID-19 pandemic halted production indefinitely. In 2022, she received widespread attention and a Tony Award for Best Scenic Design for her work on the Sam Mendes directed play The Lehman Trilogy. 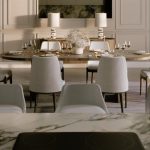