Reggio School, designed by Spanish architect Andres Jaque’s, Office for Political Innovation has been included in the list of the most impressive buildings to be finished in 2022 by El País ICON Design.

Spanish architect Andres Jaque’s, Office for Political Innovation, has completed a school near Madrid that aims to stir a colourful and vivid imagination in children.

The design of Reggio School is based on the idea that architectural environments can arouse in children a desire for exploration and inquiry. In this way, the building is thought of as a complex ecosystem that makes it possible for students to direct their own education through a process of self-driven collective experimentation.

The design, construction and use of this building are intended to exceed the paradigm of sustainability to engage with ecology as an approach where environmental impact, more-than-human alliances, material mobilization, collective governance and pedagogies intersect through architecture.

The stacking of diversity as an environment for self-education

Avoiding homogenization and unified standards, the architecture of the school aims to become a multiverse where the layered complexity of the environment becomes readable and experiential. It operates as an assemblage of different climates, ecosystems, architectural traditions, and regulations. Its vertical progression begins with a ground floor engaged with the terrain, where classrooms for younger students are placed. Stacked on top of this, the higher levels are where students in intermediate classes coexist with reclaimed water and soil tanks that nourish an indoor garden reaching the uppermost levels under a greenhouse structure. Classrooms for older students are organized around this inner garden, as in a small village. This distribution of uses implies an ongoing maturity process that is translated into the growing capacity of students to explore the school ecosystem on their own and with their peers.

A more-than-human assembly as the school’s heart

The second floor, formalized as a large void opened through landscape-scale arches to the surrounding ecosystems, is conceived as the school’s main social plaza. Here the architecture encourages teachers and students to participate in school government and to interact with the surrounding landscapes and territories. This 5,000 square-feet central area is over 26 feet high and conceived of as a cosmopolitical agora; a semi-enclosed space crisscrossed by the air tempered by the holm oak trees from the neighbouring countryside. A network of ecologists and edaphologists designed small gardens specifically made to host and nurture communities of insects, butterflies, birds and bats. Here, mundane activities like exercising coexist with discussions about how the school is run as a community and what is the way to relate to the neighbouring streams and fields. Ultimately, this floor operates as a more-than-human summiting chamber where students and teachers can sense and attune to the ecosystems, they are part of.

Visibility of mechanical systems as a pedagogical opportunity

As an alternative to architecture’s common efforts to hide mechanical systems, where all services are kept visible so that the flows that keep the building active become an opportunity for students to interrogate how their bodies and social interactions depend on water, energy, and air exchanges and circulations. The building unapologetically allows pipes, conduits, wires and grilles to become part of its visual and material ecosystem.

In the context of Southern Europe, where high-tech sustainable solutions are only available to high-budgeted, corporate or state-promoted buildings, this building develops a low-budget strategy to reduce its environmental footprint based on the following design principles:

Verticality to reduce land occupation. Instead of opting for a horizontally expanding land occupation – as is the case for 90% of school designs – Reggio School is a compact vertical building. This design decision minimizes the building’s footprint, optimizes the overall need for foundations, and radically reduces its façade rate.

Radical reduction of the construction. No claddings, no drop ceilings, no raised technical floors, no wall lining, and no ventilated façades are used in this building. The overall amount of material used in the facades, roofs and interior partitions of the building has been reduced by 48% just by replacing a big part of the construction with simple strategies of thermal insulation and mechanical systems distribution. The result presents a naked building where the non-edited visibility of its operating components defines its aesthetics.

A thick wrapping of living isolation. Cork wrapping is both thermal isolation and support to more-than-human life. 80% of the envelope of the building is externally covered by a 14.2 cm of projected 9,700 Kg/m3 dense cork. This natural solution, specifically developed by the Office for Political Innovation for this project, is used both in vertical and pitch parts of the building’s external volume to provide a thermal isolation of R-23.52, double that of what Madrid’s regulations require. This adds to the passive 50% reduction of consumed energy when heating of the school’s interiors. Beyond this, the irregular surface of the cork projection is designed to allow organic material to accumulate, so that the envelope of the building will eventually become the habitat of numerous forms of microbiological fungi, vegetal and animal life.

More thinking, less material. Led by researcher and structural engineer Iago González Quelle, the team has shaped, analyzed and dimensioned the building’s structure so that the thickness of loading walls can be reduced by an average of more than 150 mm compared to conventional reinforced concrete structures. Overall, this implied a 33% reduction in the embedded energy of the building’s structure.

Text and images by: www.officeforpoliticalinnovation.com 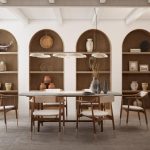 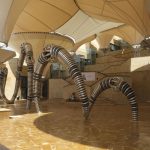