Santiago Calatrava Valls, a Spanish architect, structural engineer, sculptor and painter frequently spoke about the connection between sculpture and architecture in his work both imbuing an emotion.

His best-known works include the Olympic Sports Complex of Athens, the Milwaukee Art Museum, the Turning Torso tower in Malmo, Sweden, the World Trade Center Transportation Hub in New York City, the Auditorio de Tenerife in Santa Cruz de Tenerife, the Margaret Hunt Hill Bridge in Dallas, Texas, and his largest project, the City of Arts and Sciences and Opera House in his birthplace, Valencia.

His architectural firm has offices in New York City, Doha, and Zurich. Calatrava was born on 28 July 1951, in Benimamet, an old municipality now part of Valencia, Spain. He had his primary and secondary schooling in Valencia, and, beginning in 1957, studied drawing and painting at the School of Applied Art. In 1964, as the regime of General Francisco Franco relaxed and Spain became more open to the rest of Europe, he went to France as an exchange student.

In 1968, after completing secondary school, he went to study at the Ecole des Beaux Arts in Paris, but he arrived in the midst of student uprisings and turmoil in Paris, and returned home. Back in Valencia, discovered a book about the architecture of Le Corbusier, which persuaded him that he could be both an artist and an architect. He enrolled in the Higher School of Architecture at the Polytechnic University of Valencia. He received his diploma as an architect and then did higher studies in urbanism. At the University he completed independent projects with fellow students, publishing two books on the vernacular architecture of Valencia and Ibiza. In 1975 he enrolled in the Swiss Federal Institute of Technology in Zurich, Switzerland for a second degree in civil engineering.

In 1981 he was awarded a doctorate in the department of architecture, after completing his thesis on “The Pliability of three-dimensional structures.” Calatrava explained that he was particularly influenced by the work of the early 20th century Swiss engineer Robert Maillart (1872–1940), which taught him that, “with an adequate combination of force and mass, you can create emotion.” As soon as Calatrava completed his doctorate in 1981, he opened his own office in Zurich. He designed an exposition hall, a factory, a library, and 2 bridges, but none were built, Finally in 1983, he began to receive commissions for industrial and transportation structures of increasingly greater size; he designed and built the Entrepot Jakem, a warehouse in Munchwilen, Thurgau, Switzerland, another warehouse in Coesfeld-Lette, Germany, an addition to the main post office in Lucerne, Switzerland; a bus shelter in Saint-Gall, Switzerland (1983–85) the roof of a school in Wohlen, Switzerland (1983–88), and then some major projects; a new hall for the railway station in Lucerne (1983–89) and then an entire train station, the Zurich Stadelhofen railway station in Switzerland (1983–1990).

The train station has several of the features that became signatures of his work; straight lines and right angles are rare. The railroad platforms curve, the supporting columns lean, the concrete walls of the modernistic cavern beneath the tracks are everywhere pierced with teardrop shaped skylights, and tilting glass panels provide light and shelter without enclosing the platforms. In 1984–87, he built his first bridge, the Bac de Roda Bridge in Barcelona, Spain, which for the first time brought him international notice. The bridge, designed for cyclists and pedestrians, connects two parts of the city by crossing a wasteland of railway tracks. It is 128 metres (420 ft) long, with twin arches which lean at an angle of thirty degrees; a feature which quickly became the stylistic signature of Calatrava.

The upper portion of the bridge, composed of steel arches and cables, is light and airy, like a network of lace, anchored to the massive concrete supports and granite pillars below. His next bridge, the Puente del Alamillo (1987–1992), in Seville, Spain, was even more spectacular and cemented his reputation. Built as part of the 1992 Expo 92, it is 200 metres (660 ft) long, crossing the Meandro San Jeronimo River. Its main feature is a single pylon 142 metres (466 ft) high, leaning to 58 degrees, the same angle as the Great Pyramid of Giza in Egypt. The weight of the concrete of the pylon is sufficient to hold up the bridge with just thirteen pairs of cables, eliminating the need for any cables behind it. At the beginning of the 1990s, Calatrava built several remarkable railway stations and bridges, but broadened his portfolio by designing a wider range of structures, including a Canadian shopping center, a new passenger terminal for Bilbao airport, and his first building in the United States, the new structure of the Milwaukee Art Museum.

In 1992 he completed one of his most picturesque and sculptural works, the Montjuic Communications Tower in Barcelona (1989–92), a 136 m (446 ft)-high graceful concrete spire designed for the site of the 1992 Olympics. The concrete pylon leans backwards, and seems to grasp the vertical broadcast antennas. Its form suggests an athlete about to throw a javelin. The circular building at the base of the tower, which contains the broadcast equipment, is clad in white bricks and is equipped with metal resembling an eye which opens and closes.

The building has a particularly Catalan touch, borrowed from the park benches of Park Güell of Antonio Gaudi: a decoration of colorful ceramics tiles. The square next to it is laid out like a giant sundial, on which the tower casts its shadow. In 1992 he also finished his first North American project, the Allen Lambert Galleria in Toronto, Ontario, Canada. The interior of the shopping mall is covered by a glass roof supported by columns like gigantic trees, a modern version of the Belle Epoque Les Halles market in Paris.

Calatrava has never described himself as a follower of any particular school or movement of architecture and has also spoken frequently about the connection between sculpture and architecture in his work. “In sculpture, I have often used spheres, cubes and other simple forms often connected with my knowledge of engineering.” Some of his architectural works, most notably the Turning Torso in Malmo, Sweden, were originally works of sculpture.

Calatrava has received numerous awards for his design and engineering work. In 1988, he was awarded with the Fazlur Khan International Fellowship by the SOM Foundation. In 1990, he received the “Medaille d’Argent de la Recherche et de la Technique”, in Paris. In 1992 he received the prestigious Gold Medal of the Institution of Structural Engineers. In 1993, the Museum of Modern Art in New York held a major exhibition of his work called “Structure and Expression”. In 1998 he was elected to become a member of “Les Arts et Lettres”, in Paris. In 2005 he received the Gold Medal from the American Institute of Architects (AIA).

In 2005, Calatrava was awarded the Eugene McDermott Award by the Council for the Arts of MIT. He is also a Senior Fellow of the Design Futures Council. Calatrava has received a total of twenty-two honorary degrees in recognition of his work. In 2013, Calatrava was awarded an honorary doctorate from Georgia Institute of Technology, an award that has only been given to a small number of people. Calatrava resides in Zurich and New York City. 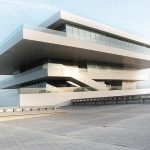