Valencia boasts of many bold, beautiful and futuristic built spaces alongside the ancient city, we bring five of the best for you to explore…

Valencia is the capital of the autonomous community of Valencia and the third-most populated municipality in Spain, with 789,744 inhabitants. It is also known for its ancient and contemporary architecture. From crumbling castles to sleek skyscrapers, you can really get to know a city and its personality through its buildings. There are so many bold and futuristic buildings here alongside an ancient city that dates back over 2,000 years.

With one foot in the past and the other firmly in the future, Valencia is an ultra-modern city which is hard to miss-on. Talking about Valencia contemporary architecture, thanks to the construction of several buildings and bridges designed by architects of renowned prestige.

Valencia’s Congress Centre is an example of a phenomenon. Design by Norman Foster from Foster + Partners, it combines state-of-the-art facilities with an architectural celebration of this historic Mediterranean city. The Congress Centre provides three auditoriums, seating 250, 460 and 1,460 people respectively, with the smallest of these capable of being subdivided into two. In plan, the building forms a convex lens or ‘eye’, defined by two arcing facades of unequal length.

The auditoria and the nine seminar rooms fan out from the tighter curve of the western edge, while the public areas – including the broad, linear foyer – run along the eastern facade. The Centre is oriented to respond to the climate and quality of light and shade, water and green spaces found in the city. The foyer looks out onto shady trees and gently curving asymmetrical pools.

Fresh air is cooled as it passes over these pools and is drawn into the foyer, minimising the need for mechanical air conditioning. Similarly, reflected sunlight is balanced by shading from brise-soleil so that natural illumination in the foyer is even and finely veiled. Except in the auditorium, daylight is drawn deep into the plan, in some places entering gently, in others forming fine piercing rays.

Valencian Institute of Modern Art, also known by the acronym IVAM, was the first center of modern art created in Spain, opening in 1989 in the city of Valencia. Institut Valencià d Art Modern is an important center for modern and contemporary art in Spain and Europe. Nuria Enguita Mayo is the Director of the museum since September 2020. Designed by Kazuyo Sejima and Ryue Nishizawa, partners in the Japanese architectural firm Sanaa, who is also the winner of the 2010 Pritzker Architecture Prize.

Veles e Vents, architecture by David Chipperfield located in the Marina of Valencia epicenter, an emblematic and symbolic building that represents the Mediterranean. A unique experience that takes the visitor on a journey through the ancient heritage of the city. The different spaces next to its 7.000 metres consist of floating terraces towards the sea, form a big centre where event celebrations, leisure, culture, music, training and innovation activities are to be found.

The bridge connects two parts of public gardens, located on the opposite banks of the Turia River. It measures 131 m long, 26 m wide and 14 m high. It was made of steel. Its name refers to the great regional exhibition that took place in 1909 at the place where one of the entrances to the bridge is located.

Admire thousands of vibrant flowers while strolling across the Flower Bridge. Pose for photos with colorful backgrounds and enjoy views along sections of the magnificent Turia Gardens. Inaugurated in 2002, the Flower Bridge replaced a temporary floating bridge. It is among 18 bridges that cross the Turia Gardens. The idea for the bridge is a reference to a line from a hymn about Valencia that says “Valencia es la Tierra de las flores (Valencia is the land of flowers).”Today an estimated 27,000 flowers divide the bridge’s pedestrian walkways with its central traffic lane. The floral displays change regularly throughout the year to reflect the four seasons and special events. Yellow and white flowers were planted to resemble the colors of the Vatican City for the visit of Pope Benedict XVI in 2006. 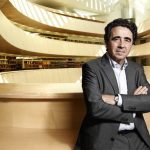 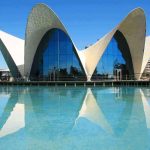