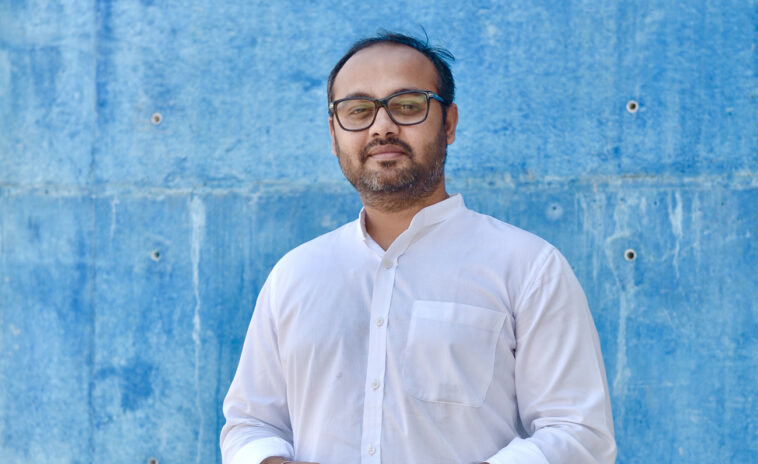 Located on the riverside in Ahmadabad, with the lull of the slowly flowing waters of the river Sabarmati, Tagore Hall has come to proudly represent the local culture for the discerning visitor. Designed by the legendary BV Doshi in 1982, the building had fallen to disrepair when the team at KBA studio stepped in to recreate the glory of not just the space but also what it represented. The renovated hall is a befitting ode to the great artist, poet and literary genius – Rabindranath Tagore.

The initial brief given to the team was to reinstate the building to its original glory so that it could regain lost ground in the wake of many similar arenas having sprung up in the interim two decades. Kartik Bijlani, in deference to the modern structure, gave the initial concept that continued the modern-contemporary tone of the architecture inside. The Corporation, however, was determined that it should celebrate and reflect the tradition and give a taste of the local culture.

With a time frame of only 10 months for project completion, this was a major hurdle that needed to be crossed. Not in agreement with the brief, he managed to convince the Corporation officials that they needed to be open to showcasing tradition in a modern context and the result is for all to see and experience. With concrete as the main material of the façade, the re-done interiors too had to continue the modern design language.

A huge stainless steel mural of Sri Rabindranath Tagore sets the tone for the interior space which has a modern outlook firmly rooted in tradition. Also, a modernist metal sculpture of a bird conceptualized and created by Ar. Kartik Bijlani complements the structure perfectly.

The glass doors and long glass panels allow natural light inside the lobby during the day, where the expansive height evokes a sense of awe. The different coloured faces representing the navarasas (nine emotions) placed over the curved auditorium base reflect its cultural importance.  A portrait of Sri Rabindranath Tagore placed centrally at the front wall creates a perspective focal point. Also noteworthy are the colourful paintings on the lobby walls that represent traditional folk art form of the region flanking the reception area.

The stepped auditorium supported by just four columns gives an intimidating yet fascinating appeal to space. To bring in a touch of colour inside, lively paintings of Indian folk art were painted over the huge walls during the renovation process. Clean lines and monochromatic themes govern the interior of the auditorium which can comfortably seat 700 people at a time. The renovation also included the stage and the backend areas which were brought up to speed with the latest state-of-the-art lighting and audio technology.

Since acoustics were a major requirement and concern for space, soundproofing was seamlessly integrated into the design language. The spaces between the concrete pilasters were covered with beautiful Warli paintings in brown and white. This seamlessly continues the theme of art from the lobby to the auditorium.

The revived interest for Tagore Hall is proof enough that the renovations have not only struck a chord with the local populace, it has also become a part of their city’s cultural fabric 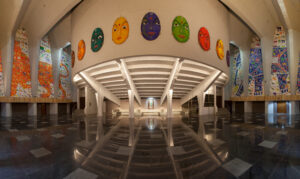 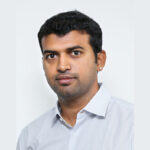 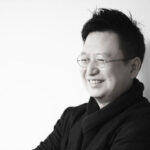