World’s one of the leading statue is finally dominating the view on a hill. Overlooking the international Bali airport this is surely creating landscape. The official inauguration will take place on the 28th August 2018, the day in which it will be open the IMF Bank event.

The figure represents the God Wisnu riding the mythical bird Garuda, source of wisdom and preservation in the Hindu religion, a religion practiced in Indonesia millennia ago, before the advent of Islam.The project required more than twenty years of work, in order to complete the enormous copper and brass sculpture. The fundraised was more than 100 million dollars from private benefactors. Statue holds with a height of 121 meters, is about 30 meters less tall than the Statue of Liberty, off New York, but Garuda is almost as wide as it is tall, indeed its wingspan is 64 meters, with a total weight of 3,000 tons.

The shape was so complex to design that engineers have designed special joints for the support structure, with up to 11 huge steel beams joining the same point. The normal construction joints have four or six beams.It was designed, built and wanted by an important Indonesian sculptor named Nyoman Nuarta, who conceived this majestic creation together with the Former Minister of Tourism, Post and Telecommunications Joop Ave in 1997, with the idea of materializing a cultural masterpiece, memorable, and indissoluble value over the centuries, which becomes the iconic landmark of Indonesia.

For this reason, Nyoman wanted to commit himself freely to this visionary plan with the intention of making a gift to his native land, Bali. One of the parts that make this statue spectacular are the Sicis mosaic decorations, the majestic headgear of the deity, the necklace that adorns him and the two shoulder pads.

Sicis provided the precious mosaic tesserae in gold and glass past and it took more than 2000 hours of work to hand-lay tesserae after tesserae, following the irregularities of the sculpture. The mosaic outstandingly enhances the face of the divinity, giving light and preciousness to the entire artistic product.

The project is very important for Indonesia, said one of the people behind the project, “Culture is a big part of our country, for our civilization.” “With culture all of us can be equal.”” Our goal is to build something great for our children and grandchildren, for our generation and for the world.” 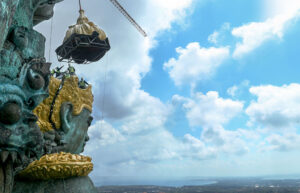 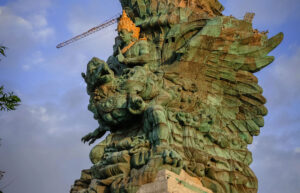 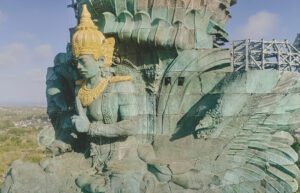 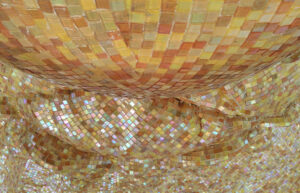