Richard Buckminster Fuller was an early green architect whose primary passion was humanitarianism, we explore his life and work…

He also served as the second World President of Mensa International from 1974 to 1983. Fuller was awarded 28 United States patents and many honorary doctorates. In 1960, he was awarded the Frank P. Brown Medal from The Franklin Institute. He was elected an honorary member of Phi Beta Kappa in 1967, on the occasion of the 50-year reunion of his Harvard class of 1917 (from which he was expelled in his first year). He was elected a Fellow of the American Academy of Arts and Sciences in 1968. The same year, he was elected into the National Academy of Design as an Associate member.

He became a full Academician in 1970, and he received the Gold Medal award from the American Institute of Architects the same year. In 1976, he received the St. Louis Literary Award from the Saint Louis University Library Associates. In 1977, he received the Golden Plate Award from the American Academy of Achievement. He also received numerous other awards, including the Presidential Medal of Freedom, presented to him on February 23, 1983, by President Ronald Reagan. Fuller was born on July 12, 1895, in Milton, Massachusetts, the son of Richard Buckminster Fuller and Caroline Wolcott Andrews. Fuller spent much of his youth on Bear Island, in Penobscot Bay off the coast of Maine. He attended Froebelian Kindergarten.

He was dissatisfied with the way geometry was taught in school, disagreeing with the notions that a chalk dot on the blackboard represented an “empty” mathematical point, or that a line could stretch off to infinity. To him, these were illogical and led to his work on synergetics. He often made items from materials he found in the woods, and sometimes made his own tools. He experimented with designing a new apparatus for the human propulsion of small boats. By age 12, he had invented a ‘push pull’ system for propelling a rowboat by use of an inverted umbrella connected to the transom with a simple oar lock which allowed the user to face forward to point the boat toward its destination. Later in life, Fuller took exception to the term “invention”.

Years later, he decided that this sort of experience had provided him with not only an interest in design but also a habit of being familiar with and knowledgeable about the materials that his later projects would require. Fuller attended Milton Academy in Massachusetts, and after that began studying at Harvard College. Fuller taught at Black Mountain College in North Carolina during the summers of 1948 and 1949, serving as its Summer Institute director in 1949.

At Black Mountain, with the support of a group of professors and students, he began reinventing a project that would make him famous: the Geodesic Dome. One of his early models was first constructed in 1945 at Bennington College in Vermont, where he lectured often. Although Bauersfeld’s dome could support a full skin of concrete it was not until 1949 that Fuller erected a Geodesic Dome building that could sustain its own weight with no practical limits.

The U.S. government recognized the importance of this work and employed his firm Geodesics, Inc. in Raleigh, North Carolina to make small domes for the Marines. Within a few years, there were thousands of such domes around the world. Fuller’s first “continuous tension – discontinuous compression” Geodesic Dome was constructed at the University of Oregon Architecture School in 1959 with the help of students.

International recognition began with the success of huge Geodesic Domes during the 1950s. From 1972 until retiring as university professor emeritus in 1975, Fuller held a joint appointment at Southern Illinois University Edwardsville. Fuller believed human societies would soon rely mainly on renewable sources of energy, such as solar- and wind-derived electricity. He hoped for an age of “omni-successful education and sustenance of all humanity”. Fuller referred to himself as “the property of universe” and during one radio interview he gave later in life, declared himself and his work “the property of all humanity”.

For his lifetime of work, the American Humanist Association named him the 1969 Humanist of the Year. In 1976, Fuller was a key participant at UN Habitat I, the first UN forum on human settlements. 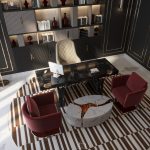 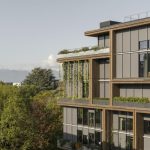