Emilio Ambasz is an architect and award-winning industrial designer. From 1969 to 1976 he was Curator of Design at the Museum of Modern Art, in New York. Ambasz was a precursor of ‘green’ architecture. Ambasz’s trademark style is a combination of buildings and gardens, which he describes as ‘green over gray’. He bucked the trends of the 1970s, hiding his buildings under grass or putting them on boats.

Born in Argentina, Ambasz is also a citizen of Spain by Royal Grant. He studied at Princeton University where he completed the undergraduate program in one year and earned, the next year, a master’s degree in Architecture from the same institution.

He will be a guest of the cultural program “build, live, think” of Cersaie 2019, with a conference to be held Thursday, September 26 at the Gallery of Architecture on the occasion of the International Exhibition of Ceramics for Architecture and Bathroom Furnishings in Bologna.

The cultural program ‘building, living, thinking’, now in its 11th edition, enriches the trade fair with important meetings and conferences, hosting – at the Architecture Gallery – leading international figures in architecture and design. 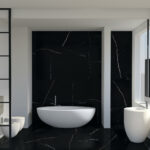