Designer Annkur Khosla has transformed the ‘Connect House,’ an apartment into one space by connecting all the aspects from each corner of the house.

The apartment is designed where the core of the project is the staircase and various activities and spaces extrude out of the central space on each level. Indians are known for their loquaciousness and need for constant interaction- it is this human need that has been addressed in the project.

Residential living requires interaction and communication from various individuals working and living in it- framing of such connections as apertures and windows for interaction is the concept of the apartment. In addition to the visual dialogues, these apertures and openings facilitate light to filter in the core of the apartment- the staircase block which does not have any windows.

These conversational openings are viewed in several instances in the project – the activity of climbing the first flight of the staircase and still able to peek into the seating area through the circular opening consciously positioned at the human eye level. One also experiences it at the intermediate levels while climbing up through the staircase railing formed by the interlocking of extruded forms which allows for apertures. The aspect of connectivity at the dining area – the extruded form also acts as a framed partition cum buffet table to allow interaction from the serving level to the individuals seated on the chairs.

It also acts as a serving counter to people sitting in the dining space. In addition to this at the den on the first floor of the apartment- circular metal riveted apertures connecting the staircase passage with the den. They allow visual connectivity also. Artworks are also juxtaposed in this project in most unique locations adding to the visual language of the space. The furniture and lights are sourced internationally from Italy and America.

(This article was originally published in The Tiles Of India May-June 2019 issue.) 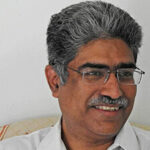 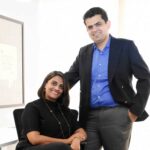