Kenzo Tange Kenzo Tange was one of Japan's most honored architects, teacher, writer and urban planner. We share a glimpse into his life and work… “Designs of purely arbitrary nature cannot be expected to last long." Kenzō Tange 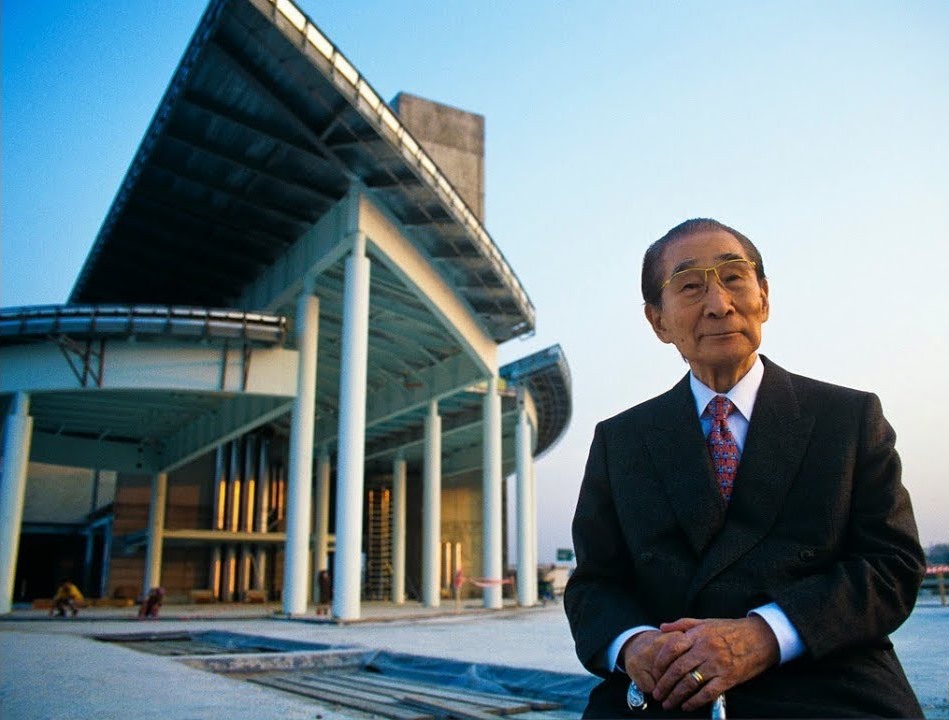 Kenzo Tange was one of Japan’s most honored architects, teacher, writer and urban planner. We share a glimpse into his life and work…

Kenzō Tange was a well-known Japanese architect. Born on 4 September 1913 in Sakai, Japan, he was one of the most significant architects of the 20th century, combining traditional Japanese styles with modernism, and designed major buildings on five continents. His career spanned the entire second half of the twentieth century, producing numerous distinctive buildings in Tokyo, other Japanese cities and cities around the world, as well as ambitious physical plans for Tokyo and its environs.Influenced from an early age by the Swiss modernist, Le Corbusier, Tange gained international recognition in 1949 when he won the competition for the design of Hiroshima Peace Memorial Park. Tange’s work influenced a generation of architects across the world.

Tange’s interest in urban studies put him in a good position to handle post war reconstruction. In the summer of 1946 he was invited by the War Damage Rehabilitation Board to put forward a proposal for certain war damaged cities. He submitted plans for Hiroshima and Maebashi. The Hiroshima Peace Center and Park begun in 1946 made the city symbolic of the human longing for peace.

Tange was awarded first prize for a design that proposed a museum whose axis runs through the park, intersecting Peace Boulevard and the atomic bomb dome. The building is raised on massive columns, which frame the view along the structure’s axis. Architecturally, the Peace Center shows a deep understanding of traditional culture while at the same time is a signpost in the search for a modern style in Japan.

He won the Pritzker Prize in 1987 for the design; the citation described the gymnasium as “among the most beautiful buildings of the 20th century”. In that year he revealed many plans and new projects from which one was the new Tokyo City Hall Complex. Since built, the complex comprises an assembly hall, a civic plaza, a park, and two tower buildings. Others projects included the Sogetsu Center (1957), the Hanae Mori Building (1979), the Hyogo Prefecture Museum of History (1982), the Ehime Prefecture Culture Center (1985), the Toin School (1986) in Yokohama,—and new projects that are still in the design stage, such as the Yokohama Museum of Art, and the Tokyo Headquarters of the United Nations University.

Tange’s only completed project in the United States, to date, is his expansion of the Minneapolis Art Museum, originally designed in 1911 by McKim Mead & White in the neoclassic style. Completed in 1975, the expansion, almost doubling the size of the original 120,000 square foot structure, was accomplished with large symmetrical wings.

Other works outside of Japan included major buildings in Singapore: the Overseas Union Bank, the GB Building, the Telecommunications Centre, and the Nanyang Technological Institute. In all of his projects, there is a recurrent theme that Tange has verbalized, “Architecture must have something that appeals to the human heart, but even then, basic forms, spaces and appearances must be logical. Creative work is expressed in our time as a union of technology and humanity. The role of tradition is that of a catalyst, which furthers a chemical reaction, but is no longer detectable in the end result. Tradition can, to be sure, participate in a creation, but it can no longer be creative itself.”

In addition to his architectural practice, Kenzo Tange has been a guest professor at Massachusetts Institute of Technology, as well as a lecturer at Harvard, Yale, Princeton, Washington University, Illinois Institute of Technology, the University of California at Berkeley, and the Universities of Alabama and Toronto. He died on 22, March, 2005 at the age of 91. He will be remembered for his role in the building of modern japan from the ashes of World War II and the Olympic games stadium of 1965.