Every little detail of the home of estudi{H}ac Creative Director Jose Manuel Ferrero, where he lives with his family, reflects his philosophy and passion for the world of tailoring, fabrics, and textures. All the natural walnut used for the project is a nod to those old tailor’s shops which years ago were the epitome of such elegance.

The entryway is an open space that’s darker than the rest of the rooms and cladded in wood seeking a connection with the other areas. It features hidden cabinets for storage. As soon as you enter, you can see his passion for fashion as well as his references which have been expressly created. Sticking out of one of the walls are some maxi pins along with the first prototype that José Manuel Ferrero designed at the beginning of his career: the Arrel coat rack. They’re combined with the models and prototypes he’s made for the different companies he collaborates with, all merging with his family’s day-to-day.

Next to the entryway is a small work area where Jose Manuel Ferrero stops when he has a little free time to do a few sketches and come up with the ideas to be further developed at his design studio estudi{H}ac. Particularly noteworthy is the prototype mirror that was designed for the home. The combination of silver and black mirrors represents the explosion of ideas generated when creating projects.

The area is surrounded by a DESALTO black metal shelving unit with books, drawings by his kids, and other objects. The Up 50 armchair by Gaetano Pesce from B&B is one of the places where he spends hours and hours reading and listening to music. It’s a piece that has accompanied Jose Manuel Ferrero in all the homes where he’s lived and was the inspiration behind the color palette used for the Project.

The living room opening up to the kitchen is the liveliest part of the home. With plenty of natural light, it was created as a common area to be enjoyed with family and friends. It’s combined with an area of sofas highlighting the pattern in the SISTER mat designed for ROCHE BOBOIS & TOULMENDE BOUCHART. They’re the graphic motifs found in the very first lamp he designed known as SISTER, which was inspired by the bonnets worn by nuns in the 1960s. Framed on the wall by a large, unfolded pattern of the Magnum armchair designed for SANCAL is a representation of the work done in the workshop, designing and studying textures.

The living area merges with the round stone table made for L,ANTIC COLONIAL – PORCELANOSA GRUPO, which also produced the fantastic kitchen made of natural wood combined with a piece of LEVANTINA Perla Venata quartzite. It is around this island that friends meet for lunches and dinners and long talks. The world of textures and experimenting with the three-dimensional effect led him to create a white lacquered wooden sculpture wall wrapping around the living room as if giant spools of thread.

The home is 120 m2 with 50% comprised of common areas and the other 50% making up the private part which begins after the hallway where you find the children’s colorful bedroom. The guest bathroom is all about the trimmings. The pureness and simplicity of the Ars Beige Nature Xl-ight stone-effect ceramic is combined with the Aro collection designed for KRION PORCELANOSA GRUPO next to the real wow in this room, the exotic LEVANTINA green piece.

Art is also present in this house with the illustrations by JUAN MICHEL BASQUIAT transformed into a skateboard, for example, around the entrance to the master bedroom as well as inspirational pieces like the collection of shirt necks bought at the Flea Market in Paris. The MAGNUM armchair was designed for SANCAL and the framed print by admired architect, painter, designer and writer OSCAR TUSQUETS, “La dama Molliniana sobre la silla Gaulino”. It’s a room that’s meant to be a place of rest.

The wood-cladded wall leads to the dressing room and private bathroom, an area with different textures featuring a mix of indigo green LEVANTINA marble die-cut with a deconstructed dowel. The colors green, nature, and perfume are all found in the most hidden away corner of the home. It’s custom-made and full of textures, design, and color. 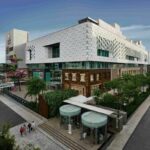