Iconic in design, with the signature flamboyance and style of the designer, we present seven of the most unique buildings from all over the globe!
Copy:

Doughnut-shaped skyscraper in Guangzhou, Canton, China
The Doughnut- shaped skyscraper in Guangzhou was completed in 2013.
It is located in the Guangzhou Circle, China. It is the Headquarter of
Guangdong Hongda Xingye Group and the venue of GDPE Guangdong
Plastic Exchange. The building has been designed by the Italian architect
Joseph di Pasquale and his professional practice AM project from Milan.
The total height is 138 mt for 33 floors, 85.000 square meters of floor area
and about 50 million euros of global investment. The inner hole is a unique
space that has no equal in the world with its almost fifty meters of diameter
(48 mt). The architectural concept is inspired by the strong iconic value of
jade discs and numerological tradition of feng shui. In particular, the double
disc of jade (bi-disk) is the royal symbol of the ancient Chinese dynasty that
reigned in this area around 2000 years ago. The building reflected in the
water of the river creates exactly the same image: a double jade disc.

The Dancing House, Prague
Dubbed The Dancing House, Prague’s Nationale-Nederlanden building
was designed by Croatian-Czech architect Vlado Milunić and Canadian-
American architect Frank Gehry. The deconstructivist, or new-baroque,
architecture forms the unusual dancing shape thanks to 99 concrete
panels, each a different shape and dimension. The building proved so
popular that it now features on a gold 2,000 Czech koruna coin issued by
the Czech National Bank.

Petronas Tower, Kuala Lumpur
Standing at 451.9 metres tall, these linked twin skyscrapers are an iconic
landmark in Kuala Lumpur, Malaysia. The Petronas Towers held the title of
tallest building in the world between 1998-2004. The distinctive postmodern
the style was created by architects Cesar Pelli and Achmad Murdijat, engineer
Deejay Cerico and designer Dominic Saibo under the consultancy of JC
Guinto. The design of each floor plate was based on the simple Islamic
geometric forms of two interlocking squares, creating the shape of an eight-
pointed star.

Lloyd’s Building, London
The award-winning Lloyd building (also known as the Inside-Out building)
looks like it belongs in a sci-fi movie rather than London’s Lime Street. The
futuristic architectural landmark is one of the most recognisable
constructions on the London skyline. Architects Roger Stirk Harbour +
Partners were behind the innovative design, which put utilitarian elements
like water pipes and staircases on the outside. Built between 1978 and
1986, the building also features 12 exterior lifts, which were the first of their
kind in the UK.

The Treehouse, West Virginia
Built on the arborous slopes of the 10,600-acre Summit Bechtel Reserve in
Mount Hope, West Virginia, the Sustainability Treehouse stands as a
beacon of outdoor adventure, environmental stewardship, and high-
performance design. It is designed by architect MITHUN Studio. The
Treehouse is the first public facility built at the Summit. The towering 125-
foot structure is a “living classroom” that invites visitors to climb up and
down its indoor and outdoor platforms to experience the surrounding forest
from multiple vantage points, as well as interact with educational exhibits

that explore the site and ecosystem at the ground, tree canopy, and sky
levels. Architect of Record BNIM oversaw construction documentation and
review to turn the Treehouse into a reality.
The design is influenced by the surrounding site and region. The structure
is supported by a 116.5 ton corten steel mega structure and locally
harvested FSC-certified wood — an aesthetic reference to the historic
industrial structures in the region. Its design also expresses “pioneering
engineering”, which is a scouting tradition based on team development of
structures using elemental materials and methods. The net-zero energy
and net-zero water facility is equipped with a 6,450-watt photovoltaic array
output, two 4,000-watt wind turbines, and a 1,000 gallon cistern and water
cleansing system. Indoor and outdoor exhibition “galleries” showcase the
natural beauty of the forest.

Opus, Dubai, UAE
The Opus is located in the Burj Khalifa district adjacent to Downtown Dubai
and Business Bay on the Dubai Water Canal. Exploring the balance
between solid and void, opaque and transparent, interior and exterior, the
design was presented by Zaha Hadid in 2007. This is the first hotel in which
she created both its architecture and interiors. This building is spread over
84,300 sq.mtr. and has two separate towers that coalesce into a singular
whole taking the form of a cube. The two halves of the building on either
sides of the void are linked by a four-storey atrium at ground level and also
connected by an asymmetrical 38 meter wide, three-storey bridge 71
meters above the ground.

La Pedrera / Casa Mila, Barcelona
Casa Mila, popularly known as La Pedrera is Antoni Gaudi’s last civil work,
which he started in 1906 and finished in 1912. Although Antoni Gaudi was
particularly well known for his modernist phase, this work is considered
“modern” and is included in the World Heritage List in 1984, along with Park

Guell and Palau Guell, it was one of the first places of the industrial era to
be added to the list of the most exceptional sites in the world. Its nickname,
“La Pedrera”, refers to its external appearance, where stone has been used
as a key material for the design of the facade and the balconies. 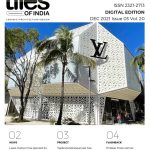 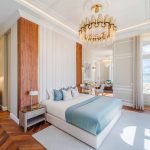