Famous Japanese architect Tadao Ando, a Pritzker winner is known for his unorthodox approach to design that has constantly pushed the boundaries of architecture.

When it comes to shaping Japanese architecture today, one name that comes to our mind is Tadao Ando. Tadao Ando has shaped the architecture of Japan. He is an icon, a self-taught architect, who was once on the path of becoming a successful boxer, however, discovering a love of design he decided to follow a career in architecture despite any formal training.

Ando was born on 13 September 1941 in Osaka, Japan. He worked as a boxer and fighter before settling on the profession of architect, despite never having formal training in the field. Struck by the Frank Lloyd Wright-designed Imperial Hotel on a trip to Tokyo as a second-year high school student, he eventually decided to end his boxing career less than two years after graduating from high school to pursue architecture.

His unorthodox approach to art and design has seen him push the boundaries of what architecture can be time and time again. As well as creating imposing churches and breath-taking temples, Ando was one of the driving forces behind the rebirth of Naoshima as Japan’s premier modern art destination. In 1995, he received the Pritzker Architecture Prize.

There is little doubt that anyone in the world of architecture will not be aware of his work. That work, primarily in reinforced concrete, defines spaces in unique new ways that allow constantly changing patterns of light and wind in all his structures, from homes and apartment complexes to places of worship, public museums, and commercial shopping centers. “In all my works, light is an important controlling factor,” says Ando. “I create enclosed spaces mainly by means of thick concrete walls. The primary reason is to create a place for the individual, a zone for oneself within society.

When the external factors of a city’s environment require the wall to be without openings, the interior must be especially full and satisfying.” Ando’s concrete is often referred to as “smooth-as-silk.” He explains that the quality of construction does not depend on the mix itself, but rather on the formwork into which the concrete is cast. Because of the tradition of wooden architecture” in Japan, the craft level of carpentry is very high.

Wooden form work, where not a single drop of water will escape from the seams of the forms depends on this. Watertight forms are essential. Otherwise, holes can appear and the surface can crack. His form moulds, or wooden shuttering (as it is called in Japan), are even varnished to achieve a smooth-as-silk finish to the concrete.

The evenly spaced holes in the concrete, that have become almost an Ando trademark, are the result of bolts that hold the shuttering together. Ando’s concrete is both structure and surface, never camouflaged or plastered over.

Although Ando has a preference for concrete, it is not part of the Japanese building tradition. “Most Japanese houses are built with wood and paper,” he explains, “including my own. I have lived there since I was a child. It is like my cave, I’m very comfortable there.” He explained that he was the firstborn of twin boys. When he was two, it was decided that his maternal grandmother would raise him, and he was given her name, Ando. They first lived near the port of Osaka before moving to where he lives today. 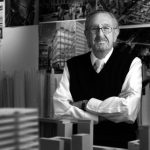