Bangladeshi architect Marina Tabassum aims to create architecture that is sensitive to the history and traditions of its place, we profile her life and work.

“Architecture can reinstall pride in the age-old wisdom of living symbiotically with nature. Architecture can empower communities to secure better lives and living conditions. and I firmly believe all this can be achieved without sacrificing the innate objective of space and place-making. Every site has a story,’ Architecture adds to the narrative by building upon the ingredients sought out from these stories. Therefore, before we ask the brick what it wants to be, the conversation must begin with the question: ‘who are you, brick? what is your story?’’ – Architectect Marina Tabassum

In 2016, she won the Aga Khan Award for Architecture for the design of Bait-ur-Rouf Mosque in Dhaka, Bangladesh. Some of her most notable designs include the Independence Monument of Bangladesh, the Liberation War Museum and the terracotta Bait ur Rouf Mosque in Dhaka, for which she was granted the 2016 Aga Khan Award for Architecture. Selective in her project choices and always sensitive to surroundings through her architectural vernacular, she is also the academic director of the Bengal Institute for Architecture, Landscapes and Settlements, and has taught at the University of Texas and the Harvard University Graduate School of Design, where she serves as a member of the Aga Khan Program Advisory Group.

In 2005, she established her own practice, Marina Tabassum Architects, and she serves as its principal architect. Since 2005 Tabassum has been a visiting professor at the BRAC University, where she has also taught courses on Contemporary South Asian Architecture. She also conducts undergraduate studios at the University of Asia Pacific, and has given lectures and presentations at a number of other educational institutions and conferences. She has been the Director of Academic Program at Bengal Institute for Architecture, Landscapes and Settlements since 2015.

While expected to become a doctor or engineer, she broke from family convention to study architecture in the late 1980s. She describes the ‘immediate connection’ she felt to the subject and her ‘first lesson in daylight’ from Louis Kahn’s national assembly building in Dhaka. Tabassum’s early lessons on light came full circle with Bait ur rouf mosque in Dhaka, MTA’s first commission that opened in 2012. The project was also a personal one for the architect as it came a few years after her mother’s death in 2002 and it was her grandmother that donated the plot of land for the mosque. The architect explained, ‘It was a moment in time when grandmother and granddaughter both sought healing and designing the mosque became our process.

My grandmother passed away within a few months of the ground breaking at Bait ur rouf mosque in December 2006.’ The design concept for Bait ur rouf mosque was to find the essence of Islam. Built from humble brick, light itself becomes the decoration as rooflights create dappled patterns on the floor. ‘Clarity of space, devoid of hierarchy, is tantamount. instead of glorifying symbolic features such as domes or a minaret, it felt right to focus on the spirituality of the space that would heighten one’s sense of being in communion with God,’ added Tabassum.

In 2020, she was listed by Prospect as the third-greatest thinker for the COVID-19 era, with the magazine writing, “At the forefront of creating buildings in tune with their natural environments, this Bangladeshi architect is also embracing the design challenges posed by what we are collectively doing to the planet.” She has been recognized for her work with the 2021 Soane medal, awarded on Tuesday 16th November 2021. ‘I am honoured to have been chosen to receive this recognition from such a distinguished institution as the Soane museum, winning the soane medal means a great deal to me’ said Tabassum about the award. 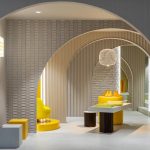